Age has never really been something that bothered me. I’ve never felt “my age”. I’m not secretive about it – I’ll be 49 in a couple of months. But my age has never occupied much headspace for me.

A very dear friend of ours passed away suddenly in June – with retirement coming close on his horizon. His wife and daughter joined us this year for Thanksgiving, as they have for the last few years, but it wasn’t the same without Doug carving the bird. I am painfully aware that I had plenty of opportunities for more time with him. But not any more.

My father (aka Papa, our favorite cellar-dweller) had an interesting summer. After multiple rounds of stent placement over the last 20-ish years, his dance card was full. No more stents. Instead, he ended up with a quintuple bypass at the end of July. Even with his long family history with heart disease, this one rattled me.

Then, in October, I found myself in the emergency room thinking I was having a heart attack.

Short story – I’m OK. With a bit of embarrassment I’ll tell you that it appears that the chest pain and pressure I was feeling was caused by acid reflux. I don’t think my ER trip was an overreaction. Heart disease runs in my family. I have high cholesterol, controlled inconsistently via a statin. I’ve watched my weight creep up and up over the last couple of years. I’ve accepted buying larger size pants. I’ve settled into an easy rhythm talking about my past accomplishments – “I ran two half-marathons two years ago…”

Not a trajectory I was happy with.

Six days ago, as I was making dinner, The Queen was watching Netflix. Although she’s not sporty, she’s a sucker for a good sports story. So she settled on The Game Changers thinking it was another underdog-comes-from-behind-to-triumph tale. As she was watching, I was cooking. And listening.

I am a world-class champion picky eater. I eat a handful of vegetables. I’ll occasionally have an apple or fruit in yogurt. I grew up thinking of meals as meat in a starring role supported by grains or vegetables. A year ago, I would have scoffed at that documentary.

But I think the events of 2019 put me in a perfect place to HEAR the message of that story. I could hear what she was watching. And it clicked for me.

The Queen will tell you that if I had announced a New Year’s resolution to “eat more vegetables” she would have nodded and silently scoffed. The idea of moving towards a whole food plant-based diet and leaving behind meat and dairy? Pure fantasy. I would be more likely to become the next Super Soldier. (Hey, at least I’ve already got a shield!)

I am in my sixth day of eating only a plant-based diet (with an eye towards whole foods as much as possible.) I’ve made oat and lentil loaf, vegan mashed potatoes, veggie loaded black beans and rice, black bean burgers, cashew sour cream, spaghetti squash and plant-based Italian sausage, and a veggie stir fry starring satein. This afternoon I cooked up some chickpeas to try a DIFFERENT vegan meatloaf recipe and make up a chickpea-based “chicken salad”.

I started running again – today being the 5th day in a row of 2.5 miles a day on our treadmill. I have felt both full and satisfied with my eating. I feel good.

I’m not trying to convert anyone. I’m not even saying that I am entirely giving up meat and dairy. (I love making homemade pizza. I need to think about how I can satisfy that appetite.) I am trying to eat less meat and dairy and more whole plant-based foods. I am excited at the idea that I am feeling good about something that I think is going to be a positive change for my health. I want to run a marathon the year I turn 50. (That’s 2021, y’all.)

Consistent with the guiding principles of this blog (Be Authentic and Vulnerable) I’m happy to share where I’m starting from. 192 pounds, cholesterol in the 210’s, and worried that I’m going to die of a heart attack in my sleep. 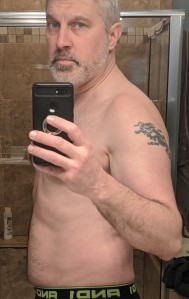 I hope that 2020 is a better year. I don’t know where this will end up. I will share what’s working for me and what isn’t. I wish health – and happiness – for you all!